After our trip to the Auburn Shell Lab with my group of oyster gardeners, my two boys and I ventured out to see if the beach needed some cleaning.  The past few days volunteers have been all over the Alabama beaches picking up trash.  Apparently its easier to clean oil from the sand when there’s no trash mixed in.  We were surprised to see how clean the beach was.  So we walked around briefly and headed home. 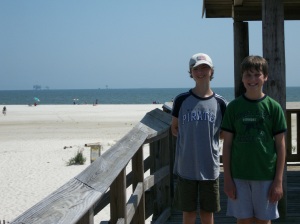 If you can’t read the sign it basically says that the area of the Park and the Bird Refuge dates to around AD 1100-1550.  Excavations were done in 1990 and archeologists found that the mounds had been visited seasonally and mostly during the winter and spring.  These mounds included oyster shell, charcoal, fish bones and potsherds.  The Choctaw and Creek Indians had fished the area and harvested oysters until 1830.

Heading home we saw that workers were putting the booms around the island in anticipation of the oil spill reaching land.  Several bays, estuaries and creeks have been protected as well.  While most of the island is being protected by these booms, there are parts that just can’t be, though, since the mouth of the Mobile Bay has to stay open for shipping.

you can see the yellow and orange booms around this marsh. This picture is taken by the ferry ramps on the east side of Dauphin Island.

We’ll be back; we forgot to visit Ft. Gaines!