Back in March, we went with some homeschool friends to Blakeley Park and Battlefield in Spanish Fort AL.  We had never been and had heard bicycling was great there, so we loaded our bikes along with a friend and his into the car and headed out.   It wasn’t what we expected so the bikes never left the rack on my car.  But, instead we had a blast traveling through the dusty roads and trails and stopping every so often to chase around the zig-zags in the battle field.

We first stopped, when the paved road ended at a cemetery and looked around.  The site had been there since the yellow fever epidemic, although on one of the grave markers we read that someone died from being kicked by his horse. 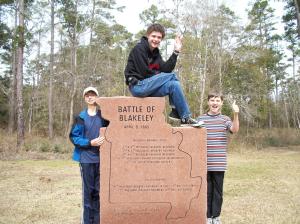 Nick, Austin, Travis and Tanner in the battlefield

Blakeley was the site of the last battle of the Civil War.  Just two days after Lee surrendered at Appomatox Court House, before word got around, there was a bloody battle in Spanish Fort, AL.

Watch where you're going or you'll fall in one of these... 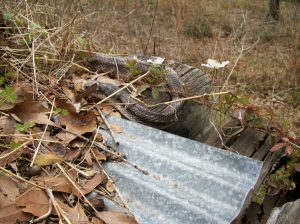 A 3 foot long snake on top of the underground hideout...he went in after the boys climbed out. Creepy 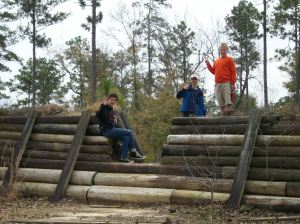 We found a nature center where we met up with another family from the homeschool group.  A man working there let us watch a movie about the nature and battles of the area.   Having enough of nature and the carpenter bees that hovered around the outside of the building we set off on another adventure…this time finding the battle fields, hideouts, and the boardwalk along the marsh where we ended up eating lunch.

Apparently the Confederate soldiers hid from the Union army inside this tree. It's huge inside, under the roots.

It was a great day.  Bicycling will have to wait for another outing.