The boys and I went on a field trip with our homeschool group to the Mobile Transportation Dept.  We were going to learn about the tunnels that go under the Mobile Bay.

We first learned how the traffic is watched and police and other help is dispatched should there be a vehicle accident or a vehicle in need of help.  All along most of the Mobile highway system are traffic cameras watching cars and trucks come and go.  There are a lot of screens and we did see a car in trouble coming off I-10 at an exit.  It was being followed by a traffic assistance truck.

After a trip to another building we climbed down several flights of grated, see-through, steep stairs to get underneath the tunnel that goes under the Bay. 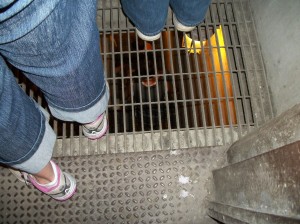 Climbing down multiple flights of a see-through staircase.

Half-way down, one of the dads held open the door to the road.  Cars screamed by only a few feet away inside their tunnel.  The stairway was completely scarey.  I don’t do well with heights, but the kids were way ahead of me and I really wanted to see where we were going.

The stairwell down to the tunnel

Arriving at the bottom we headed through a series of doors and to a space, maybe 7  feet high, that runs underneath the cars in the tunnel.  Huge fans keep the air flowing and the tunnel above well ventilated.  The space spanned from one end of the tunnel to the other.  We stayed at that one end for the kids to enjoy the fact that they were under the bay.

A little known facts I learned: the top of the Wallace Tunnel is 55 feet below sea level and ship clearance over the tunnel can be about a foot.  Not much room to error.

Climbing back up the step was much better.  That was truly an awesome fieldtrip.  If  you get the chance to go, ask for Felix as your tour guide.