It was a beautiful day for the Fair, so we went.  Gary was working so it was just me and the boys.  We loved seeing the animals: chickens, ducks and ducklings, roosters, goats, cows and calves.   There were pig races which hadn’t started yet (I think that was an evening event), a petting zoo and two camels to ride for $5.  We passed on that. 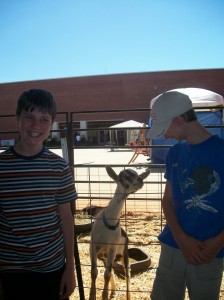 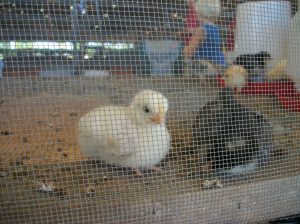 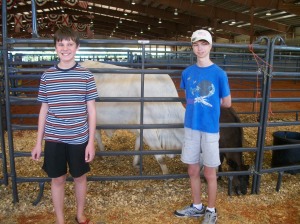 Inside the Midway, we just walked around to see what was happening.  We don’t ride carnival rides; we’ll do Disney and Universal Studio-type places, but not carnival rides.  It was fun to watch them. 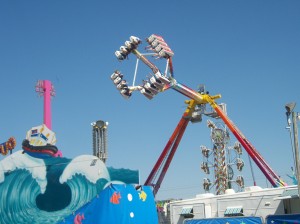 We bought carnival food: snowballs, pizza and “fresh” lemonade; ran into some friends.  Travis saw a prize at one of the games that he just had to have, so I gave him a couple dollars to try.  It was a ring toss on wierd shaped pegs.  You never win those things but he was convinced he could get a back row prize: $20 bill or a video game.  He walked away with 4 Mardi-Gras type beads.  Oh well.

Trying to win the impossible

Inside the exhibit hall, we saw some friends from 5 Rivers Delta Resource Center.  They had their possum and skunk with them.   There were other exhibits: ribbon winners.  I only saw one white ribbon and one honorable mention.  Don’t know why they only earned those.  Seems everyone else got a blue ribbon; there were a couple red.  Most exhibits were horticulture or robotics.  Maybe the boys should enter some things next year in other catagories.  They’d probably clean up with blue ribbons.  They did well in the Sarasota County Fair.

The Baldwin County Fair does not participate with the 4H like other counties around the country do.  It’s a shame.  I believe the Fair could have so much more County involvement and more personality; there are a lot of clubs here.  4H does have contests for its members to compete but there’s something really great about exhibiting animals, art/crafts, and other things as a 4Her at the County Fair.  And, I’m sure there are families like us that don’t ride the rides.  More exhibits and entertainment during the day would make it more appealing.  For what the Baldwin County Fair lacks it was still a great day to attend; we got plenty of sunshine.  We only stayed less than 2 hours.  Should have been a full day of entertainment especially for a Saturday.