This week my husband saw a deer in the neighborhood while walking our dog.  It was around 6am.  We haven’t seen deer since early spring when they made their daily walk through our back yard.  Where do deer go in the summer?

The squirrels are really bugging me…partly my fault, though.  I was filling the bird feeder (which I really want to move to the center of the yard for the fall) and accidentally put a hole in the bag so I didn’t carry the bag into the house.  I left it on the back table near the door.  Well, a squirrel found it and we (the boys and I) watched face-to-face with this little guy as he ate from the bag.  Cute, right?  As soon as he left and we finished laughing about it, I put the bag into a Home Depot paint bucket and stuck the lid on it.  That squirrel came back this morning.  I guess he smelled the food and started eating the bucket, putting a big enough hole in it to render it useless.  It’s a recycle bin item now.  He never got to the bird food.   It’s still in the bucket in my garage.  The pictures below were taken through a window, hence the white-ish glare.

Yum!He's so cute; how could anyone hate a squirrel?

The Poplar trees have been turning yellow and brown all month long.  This week we trekked over to Eastern Shore Center.  It was overcast and because of the yellow/brown Poplars, we felt autumn was in the air, until we got out of the car and felt the heat and humidity.  It’s still summer.  The Crepe Myrtles are losing their foliage as well.  It’s been dropping all month.  The Cedar trees in the neighborhood look a little white-ish green and some have started browning.

It’s been raining again.  In our house we have a saying:  A day with rain is like a day in South Alabama.  Conversely, a day without rain is like a day somewhere else.  Mobile is the “rainiest city.”  I wish it would go away but then I’d have to water my grass.

Our oyster garden team went to the pier this week.  The spat is big enough to scrub clean of barnacles and algae.  The family that went sent some pictures and they look good.  What a cool project.  Find out more by going to www.oystergardening.org. 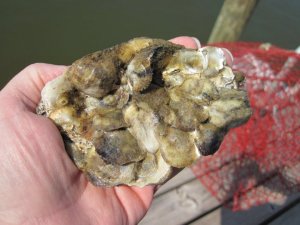 After a good cleaning. The spat has really grown since we started this project.