A friend of mine sent me an email asking that I identify a bird for her.  She said it just appeared in the neighborhood this morning and was pecking at a neighbor’s front window.  The neighbor let the bird in and, thinking it’s someone’s pet, sent out a note that she had it.  The bird is in Lake Forest/Daphne, AL. 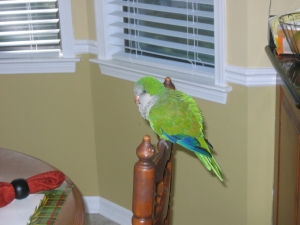 It’s a Monk Parakeet.  They live in South America, Northeast and Midwest Texas, and South Florida.  Our recent weather which consisted of a storm from Texas heading eastward,  could have caught this bird off guard.  The storm passed through lower Alabama early this morning around 5am with strong winds and heavy rain.  The bird showed up after the storm.

Birders often wait until a front goes through during spring and fall migration for the chance to spot a bird that normally doesn’t fly in their area.  I get bird reports from one Audubon Society along the coast and love reading the list of what’s been seen after a front passes through and how the birders all flocked to certain areas where a particular bird was spotted.  They’ll even drive across the state or to another state to see the bird.

Well, I gave my friend the phone number to some Audubon people here in Baldwin County.  I suggested that unless the bird is exhausted, it might be injured and should be looked at; perhaps banded and released.  Anyway, I hope it finds its way.

Edited October 25, 2009, 3:50pm: Now for “the rest of the story”…turns out this Monk is named Sebastian and lives in a cage 1/4 west of where it was found.  The owner is happy to have it back.  How it got out I don’t know.  I was really hoping it was a bird that had gotten here via storm.  It’s just makes for a cool story.  I’m not a fan of caged birds.  I had a canary named Puffy when I was 5 and couldn’t stand the thing.  I enjoy the wild birds.